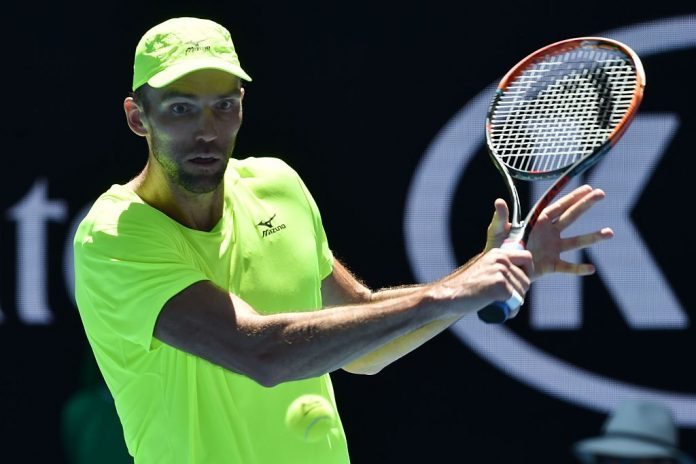 Of course, one of the answers to this riddle is Roger Federer. He is the answer to every tennis question.

But the other? Ivo Karlovic.

IK is widely regarded as one of the greatest servers of all time, and still the second best on Tour by the ATP’s service metric, just a few points behind John Isner.

But the Croatian string bean is far more than just an all-galaxy service – having turned pro almost 20 years ago, Karlovic is one of the fittest and most consistent players on Tour.

In fact, Karlovic is the second oldest professional tennis player in the world. Only Czech Radek Stepanek is older, by only two months, and is ranked down at #97.

Karlovic burst onto the scene in 2003, when in his first ever Grand Slam appearance at The Championships, he defeated then world number one and defending champion, Lleyton Hewitt.

To this day, he is still only the second man to defeat the defending Wimbledon champion in the first round.

Despite that victory over Hewitt, Karlovic never fared particularly well at a Grand Slam. His best result was a quarter final at The Championships in 2009, where Roger Federer took him down in straight sets.

2008-9 was also arguably the peak of the Croats’ talents, when he reached #14 in the world the week before the ’08 US Open, where he was upset in the third round by unseeded local service freak Sam Querrey.

Despite the lack of form in the biggest tournaments, he has always managed to be a productive member of the ATP Tour, coming away with 8 singles titles from 17 finals, the first of which came in 2007 in Houston.

For a serve-volleyer, Karlovic has also shown a fair amount of versatility over his career, winning titles on clay, grass and hard courts.

Speaking of winning, throughout Ivo’s 15-year pro career, he has only registered four seasons without a win over a top 10 opponent. That is devastating impressively for a man who has never made the top 10 himself.

In most years in fact, he has registered 2, and has multiple wins over Lleyton Hewitt, James Blake, Tomas Berdych and even a 2-1 winning record against Novak Djokovic.

Even two years out from his 40th birthday, the world number 20 doesn’t look to be slowing down. Quite the opposite actually.

After finishing 2013 ranked a comparatively low 78, Karlovic has, in successive years, climbed to 27, 23, and 20 and is maintaining his year-end ranking from last years despite pressure from youngsters such as Pablo Carreno Busta and Alexander Zverev.

So here’s to you Ivo – here’s to good health, good tennis, and years of prosperity for the 38 year old, 15-year veteran who looks like he’s ready to go another 15 years.